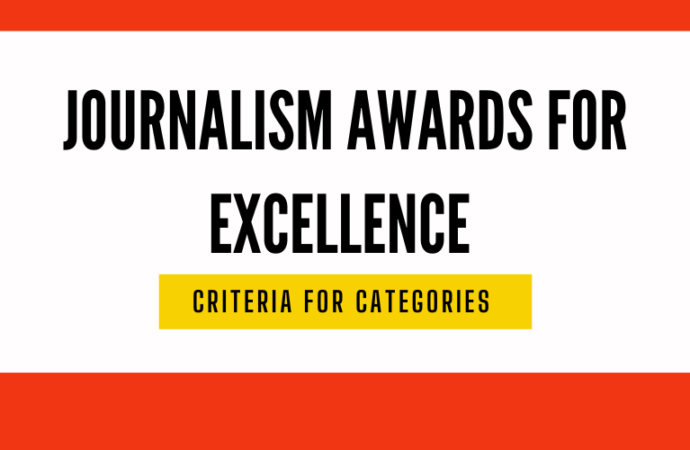 Journalism Awards for Excellence  Criteria for categories    ME – Mervyn de Silva Journalist of the Year (one prize any language) Criteria: This Award, given in memory of the first President of The Editors’ Guild of Sri Lanka and well known Editor, columnist and foreign correspondent. The Award is a recognition of excellence and consistency

Criteria: This Award, given in memory of the first President of The Editors’ Guild of Sri Lanka and well known Editor, columnist and foreign correspondent. The Award is a recognition of excellence and consistency throughout the year and adherence to the best of journalistic practices. It is open to Sri Lankan Editors and journalists. Applicants should have covered a wide range of issues of critical importance to the country and society. A statement of not more than 250 words explaining the significance of the achievement with supporting material should be submitted with each entry form. This Award calls for published material which has given wide exposure to news and news features.

To win this prime award, applicants should have used media content skillfully and creatively. He/she should have an inquiring mind and investigative persistence resulting in in-depth stories. The courageous and responsible handling of sensitive issues, despite threats or challenges, will be an advantage to win this award.

IJ – Investigative Journalist of the Year (one prize any language)

Criteria: This Award goes to the journalist or team of journalists who had published an accurate insightful story or series of stories on the same subject matter, strictly of investigative nature and of national significance. These can be on serious crimes, political corruption or corporate wrongdoing. A supporting statement of not more than 250 words should be given by the Editor if a team of journalists is applying. Judges will take into consideration the research done, professionalism shown when conducting investigations and the impact of the exposure on society and/or the authorities. The story need not necessarily be a Scoop and could even be a follow-up but one that has both public interest and of national importance.

SC – Scoop of the Year (one prize any language)

Criteria: This category is for the journalist or the team of journalists who have published the single best exclusive report for the year that had national implications. Please submit a copy of the story. A supporting statement from the Editor is required if a team of journalists is applying. A scoop must be exclusive and it should be the original work of the applicant/applicants

Criteria: This Award is to honour Denzil Pieris who was one of the finest journalists Sri Lanka has produced and who was widely admired both at home and abroad. The applicant must be under 26 years of age who by his or her work shows impressive potential in journalism and with fair and accurate reporting, has produced a consistent body of work adhering to best journalistic practices. Judges will be looking for a young journalist who had made an impact as a journalist during the year. The winner of this award will receive the Lakshman Kadirgamar scholarship for journalistic studies abroad. Submissions should be a full body of work with consistency of reporting in both news and features. Interviews in the question and answer format are not accepted.

BH – Best Health Care and Medical Reporter of the Year (One prize each for Sinhala, Tamil and English languages)

Criteria: There should be a minimum of six (6) submissions in each application. This category is for journalists who have published consistently stories concerning health issues.  Stories should be based on health issues, medical treatment and its control. Importantly, stories should be well researched and should not confine to material from handouts and press releases. Interviews with doctors explaining health issues, its control and treatment should be explained in simple language that could be understood by the layman with the minimum use of medical terms. The interview however, should not be an advertisement for the doctor and the submissions sent should not be interviews with the same doctor.

ER – Environmental Reporter of the Year (One prize each for Sinhala, Tamil and English languages)

Criteria: The Award is for a journalist or a team of journalists who have produced a body of work throughout the year that focused on the environment, raised awareness for conservation and/or exposed environmental abuse. Judges will look for a long-running investigation, campaign or series of reports. One-off stories that have had a very strong and definitive impact on society and resulted in action by the authorities will also be considered. A maximum of six (6) articles can be submitted with each entry. Submissions should make an impact on the reader to appreciate the value of environmental protection. It should be well researched and should have a scientific basis.

SJ – Sports Journalist of the Year (One prize each for Sinhala, Tamil and English languages)

Criteria: This Award is given to a journalist specializing in sports. He/she should have given added value to the sports coverage by going behind the scenes and producing a solid body of work on the subject. Entries could be from contributors on a single sport or several sports and should include sports scoops, coverage and/or interviews that had led to follow-up stories. At least six (6) copies with a supporting statement need to be submitted.

BD – Best Designed Newspaper of the Year (One prize each for Sinhala, Tamil and English languages)

Criteria: This Award is given to the team or an individual producing the best designed newspaper in the country – a newspaper that is reader-friendly, attractive and appealing to the general public. Judges will look for the newspaper that has achieved maximum impact through design and the handling of stories throughout the sections of the newspaper. The balance, rhythm, colour sense, readability, reader-friendliness, the use of space and visual harmony will be taken into consideration for the evaluation. Entries must include at least six (6) copies of the original newspaper. The entire newspaper with sections should be submitted.

BF – Business and Finance Journalist of the Year (One prize each for Sinhala, Tamil and English languages)

Criteria: This Award is given to the journalist who consistently covered business stories that interested and impacted on the reader, increased the understanding of business, finance and the economy and was fair and accurate in his/her reporting adhering to the best of journalistic practices. Applicants will be judged on their ability to break news, predict trends, analyze stories and explain issues to a general audience. A compelling style and clear understanding of the readership will also score marks. Interviews must not be in the question and answer format. Stories based on press releases are not eligible.

CY – Cartoonist of the Year (One prize each for Sinhala, Tamil and English languages)

Criteria: This Award is for the artist who was able to convey the mood of the country and comment on the state of the nation through his/her satirical drawings or computer graphics. Judges will look for the cartoonist who transcended language barrier in his/her work and captured the imagination of the public on public issues through art and sense of satire. A minimum of six (6) cartoons covering the year need to be submitted to the judges.

KR – Prof. Kailasapathy Award for Reporting Under Special Circumstances (One prize each for Sinhala, Tamil and English languages)

The trying circumstances should be clearly stated in the entry. If a team of reporters submit an application, a supporting statement from the Editor concerned is required. As many published articles as possible though not more than ten (10) may be submitted in support of the entry. This Award could be made posthumously provided an entry is submitted by an Editor, a family member or a member of the Editors’ Guild.

PJ – Photo Journalist of the Year (one prize any language)

Criteria: This Award is for the photojournalist who consistently captured the best picture for news or feature story during the year and was technically sound and clear in his/her presentation. Judges will look for the most compelling news and/ or feature photographs taken by a photojournalist over the year. They will also look for versatility, technical skill, including cropping of pictures and the ability to capture the picture that matters. The mood of the interviewed subject or feature needs to be seen prominently. Where possible, every picture must be accompanied by a caption. Each submission should consist of a minimum of six (6) to a maximum of ten (10) pictures. Photographs of poor quality, photographs that have been digitally manipulated and those that have been incorporated into headlines will not be accepted. Every entry should be within a frame.

SC – B. A. Siriwardene Columnist of the Year (One prize each for Sinhala, Tamil and English languages)

Criteria: This Award in memory of B.A. Siriwardena, a versatile writer and Editor goes to the writer who expressed himself/ herself boldly, stimulating thought and debate among readers. This commentary could be written either under his /her name or under a pseudonym but should be a regular bylined column. Judges will be looking for the writer’s unique style. At least 12 such columns should have been published within the year of which six (6) need to be submitted as entries. A supporting statement is required from the Editor if a pseudonym is used. Submissions should be consistent and limited to a column or two in length and not a whole page.

RT – Best News or Feature using RTI (One prize each for Sinhala, Tamil and English languages)

Criteria: The story published using RTI must state how RTI helped to highlight an issue of public interest and seek redress. It should also give the process adopted in seeking the RTI information from the time of the application until the result is found.

Criteria: The Award is given in memory of Subramaniyam Chettiar, who founded the Virakesari in 1930 – a man who stood for the rights of workers. This award is for a reporter who has consistently highlighted social issues in a fair and ethical manner, who sought to give voice to the voiceless and moved to find solutions for these issues through the media. Submissions must not only break a story but follow it through until justice is done. Stories should focus on social issues.

UW – Upali Wijewardene Feature Writer of the Year (One prize each for Sinhala, Tamil and English languages)

Criteria: This Award is given in honour of Upali Wijewardene – the founder of Upali Newspapers Ltd. The Award is for a Feature Writer who has to submit a minimum of six (6) that are varied and captures the essence of issues and subjects while giving the reader a better understanding. The articles must also be fair and accurate and adhere to the best of journalistic practices. The quality of writing and the use of language are paramount requirements in this category. Judges will be looking for journalists who demonstrate a compelling style in feature writing and news-feature reporting. Features could vary from stories of human interest to any subject that could hold the interest of the reader and need not necessarily be issue-based. One-on-one interviews are not eligible for this category.

Criteria: The Award looks for the best design in online websites keeping in mind the accessibility and visual impact.