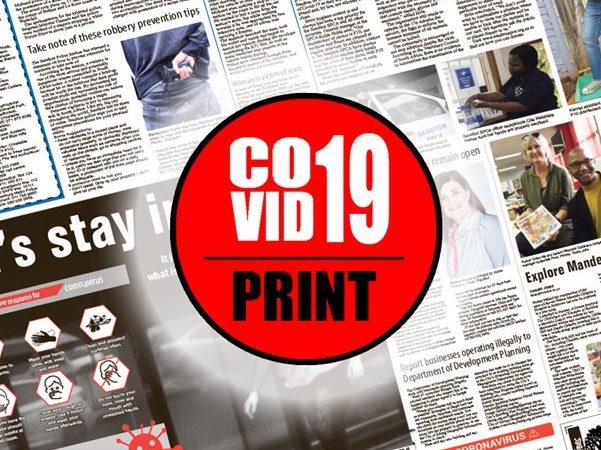 Newsprint and COVID-19 There is good news for news publishers: Contrary to rumor, it is extremely unlikely that readers will catch the coronavirus from printed newspapers, and the newsprint supply chain remains in good shape. Those were the two main points emerging from last Wednesday’s (March 25) WAN-IFRA Webinar with Dr. Rick Stunt, Group Paper

There is good news for news publishers: Contrary to rumor, it is extremely unlikely that readers will catch the coronavirus from printed newspapers, and the newsprint supply chain remains in good shape. Those were the two main points emerging from last Wednesday’s (March 25) WAN-IFRA Webinar with Dr. Rick Stunt, Group Paper Director at dmg-Media in London.

Dr. Stunt has worked for dmg-Media (formerly Associated Newspapers), publishers of the Daily Mail, Mail on Sunday, Metro freesheet, and other titles, for 26 years. A former chairman of the World Printers Forum Board, he holds a Ph.D. in chemical physics.

The webinar, moderated by World Printers Forum Director Ingi Olafsson, was attended by about 100 people from around the world.

Here is a summary of Dr. Stunt’s comments: Production, inventory, availability of newsprint during the crisis.

Here is a summary of Dr. Stunt’s comments: Safety concerns about newsprint and whether it can transmit the virus.

Answers to questions from participants: What about demand?

Q: Is the coronavirus affecting newsprint demand? Is demand shrinking because newspapers are restructuring their products?

A: Dr. Stunt: Circulation of our free newspapers is affected by volume of foot traffic, since they are picked up on the street. Metro has gone from 1.5 million output to 500,000. Our Evening Standard title (also free) has reduced output by 10-20 percent, will start delivery direct to households. For free newspapers in general, newsprint consumption is dropping in the 30-60 percent range.

Paid-for circulations are holding up pretty strongly. In the UK, single-copy sales are the mainstay. Aside from the usual 8-percent drop year to year that was already happening, sales are relatively stable.

Conclusion: newsprint consumption will drop in the next 2-3 months.

Q: One elderly former managing director of a newspaper company said he is ironing every page of his Daily Telegraph each day before reading it. Should he continue to do so? Obviously he’s doing it based on reports of the virus being destroyed at 26-27-degree temperatures. Should he continue to iron given he is high-risk?

A: No need for that!

Q: In some central and southwestern European countries it seems that recovered paper collection rates are falling because of COVID-19. Have you heard of that happening?

A: No. In the UK they are stable. Recycling paper is collected from each household here. Probably in countries where people bring paper to containers situated elsewhere the rates are falling.

Q: In Brazil and most of the rest of Latin America, most tabloids and free papers are not delivered to subscribers, but are available only on newsstands. Two of them have ceased printing in Brazil this week alone. Does dmg plan to suspend Metro as long as the crisis lasts?

A: We are a big group and have lots of resources to keep going. Metro is very profitable, so we hope it bounces back when the pandemic is over. For companies whose freesheets are less robust, there is cause for concern if foot traffic does not come back pretty quickly.

Q: Is there a danger that the present reduced volumes will not recover, as previous newspaper buyers now staying at home will get used to getting their news online and perhaps not revert to hard copy when all this is over?

A: That’s everybody’s concern. If you change your behavior for more than six weeks, it becomes ingrained. If the lockdown continues for 2-3 months, people will lose the habit of going out to buy the paper. Online newspapers are being read very heavily.

Q: I hear that at least one paper mill has stopped production because of COVID-19. Do we have a view on the balance of supply vs demand?

A: Rumors are circulating that some mills have had to stop production because workers have contracted the virus. A few of those rumors are correct, but others are false. Most paper mill operators are hopeful they can continue operating, but if there are cases of infection, they must comply with government guidelines, which in some cases require them to stop temporarily and sanitize everything. Most paper mills are in places with hot, humid climates, where the virus tends to disintegrate more rapidly, fortunately.

Q: Is it important to inform the public that producing newspapers is highly automated and involves no human contact with the paper?

A: Yes. There hasn’t been much public concern in the UK, but our newspapers have published some information about the safety of reading news on newsprint.

Q: There are no more printed newspapers in Morocco. The decision to cease printing is based on safety concerns. Is that an appropriate decision to take?

A: No. But I don’t know the circumstances. It’s up to the government. As I said, it is highly unlikely that the virus could be spread by newspapers. But I suppose that if one copy is read many times, the chance of transmission might increase.

Q: The Italian government has classified newspapers as a basic necessity, enabling journalists to continue reporting, with print and distribution operations continuing. Are publishers in the UK pushing the government for similar accreditation?

A: We already have that.

Are any paper mills locked down?

Q: Are there any paper mills in the world that have been locked down?

A: Except for the few incidents mentioned in a previous answer, no. In Latin America some sites where additional production capacity is under construction have been locked down.

Q: There are two schools of thought regarding inventory lately: to increase, because of supply chain disruptions, or decrease/keep at the same level because of a drop in consumption. What are your views on what most publishers will do? Should they be hoarding consumables or store them on a just-in-time basis as usual?

A: In times of uncertainty like these, it is advisable to build up inventory as much as possible – if you have the financial ability and the space for storage. Almost all publishers are quite limited by space restrictions. Inventory in mills is ample at the moment. It’s important to monitor developments closely. If things seem to be returning to normal, you can reduce inventory again.

Q: Are there any newspaper print plants in the U.K. that have been locked down because a printer has caught the virus? Are any publishers being forced to implement contingency plans?

A: Every publisher has contingency plans. We certainly do. We can move production around the country or even to other countries if needed. We have not had to do that yet, and I am pretty sure other UK publishers haven’t either.

Q: In the USA many newspapers are delivered in plastic bags. Could the virus be passed on via the bags?

A: It certainly is a possibility. Research has found that viruses can remain on the surface of certain kinds of plastic and be viable for much longer periods than on cardboard or paper. I am not aware of any evidence that people have contracted it from plastic, but it is possible.

Q: Has there been a shortage of solvents for the printing of newspapers, as printers of packaging are facing – synthetic ethyl alcohol in flexo printing and isopropanol in offset – because those solvents are also used as medical disinfectants?

A: That is not my area, but my production people have not mentioned any such shortage to me. Many components of consumables are manufactured in China, though, such as synthetic alcohol, and for a time there were shortages, according to one of our suppliers. But the situation has returned to normal.

Q: How do you think our industry will develop in the coming months?

A: It will depend on how long this goes on. The longer it goes on, the worse shape newspaper publishing will be in at the end of it. That’s especially true of the freesheet business. Paid-for circulation is holding up, but advertising income has fallen significantly. If the crisis lasts six weeks, most newspaper groups will be in serious trouble financially.

Q: Are Daily Mail and Mail on Sunday seeing a lift in sales, since people rely on known newsbrands for accurate information during a crisis?

A: We have seen a slight uptick in the last couple of weeks. The concern in the U.K. is that with the much stricter lockdown, people will find it more difficult to go out and buy newspapers. They are allowed to buy food once a day, but if they go to a store that doesn’t sell newspapers, that will hurt sales in the medium to long term.