Sunday Observer – June 16, 2019 Media activists call for an independent regulator and proper inquiry by Editors’ Guild into news story that took Kurunegala and the country by storm For advocates of ethical journalism and fact-based reporting, the story of Segu Shihabdeen Mohamed Shafi, a doctor from Kurunegala is a cautionary tale. On May 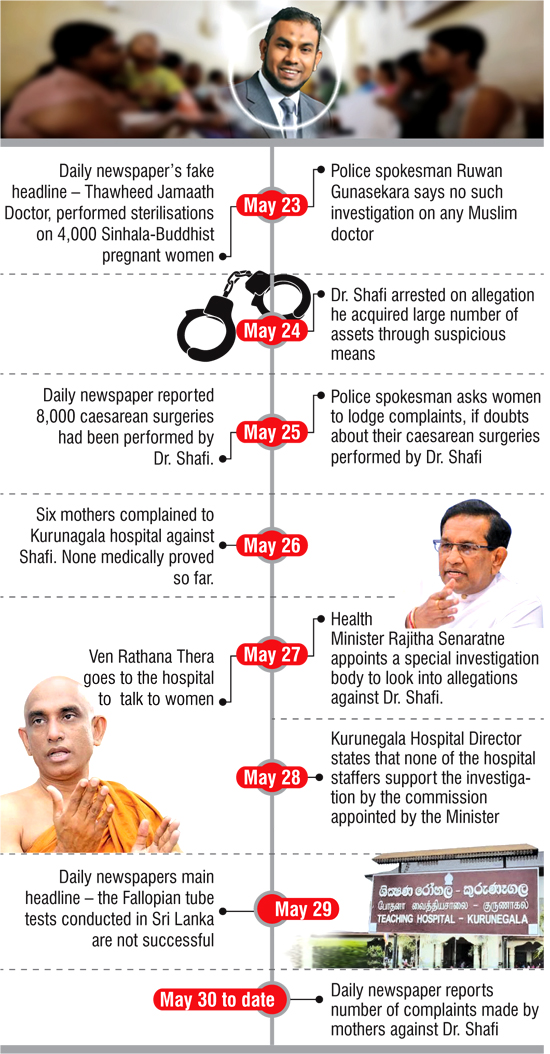 For advocates of ethical journalism and fact-based reporting, the story of Segu Shihabdeen Mohamed Shafi, a doctor from Kurunegala is a cautionary tale.

On May 23, a Sinhala language newspaper published a story that police investigations had been launched into an allegation that a National Thawheed Jamaath doctor had sterilised 4,000 Sinhalese women at a Government hospital in Kurunegala.

The Police Spokesman immediately denied that an investigation was under way, and told reporters that police was yet to receive a single complaint about the story published in the newspaper. Two days later, Dr Shafi was under arrest, held under Emergency Regulations and a two-week detention order (DO), allegedly for suspicious accumulation of wealth. That this is an uncommon charge under which to arrest a person under Emergency Regulations, is one thing, legal experts say, the other is that this is not a charge suspects are arrested for until investigations are complete.

Once the arrest was made, Police Spokesman SP Ruwan Gunasekera was before the cameras again, urging women who have complaints against the doctor in connection with the ‘sterilisation scandal’ to bring them to the CID. Kurunegala Police had, by this time, arrested Dr. Shafi and put him under a DO and handed him over to the CID for investigations. Since the arrest, some 700 women have come forward with “complaints” about the doctor. The forcible sterilisation theory has been widely debunked by specialists who insist that (a) no doctor could crush Fallopian tubes of a woman on the operating table without the knowledge of the surgical team, (b) that the Fallopian tubes are not visible in the caesarean wound and would have to be forced down into the cut by inserting a hand into the abdomen and (c) that no doctor could crush the tubes of 4,000 women without at least one patient bleeding out on the table.

The CID is investigating the issue and will soon submit facts of their investigation to court. The Ministry of Health has appointed a committee of six experts to investigate the allegations. The Kurunegala Teaching Hospital, where Dr. Shafi practised, is conducting its own internal inquiry.

The editor of the newspaper in question has told the Reuters News Agency that the story was based on information from the police and hospital staff. He continues to stand by the story.

The whole country knows Dr. Shafi’s name. His face has been splashed across multiple newspapers and television screens. His family and his wife, also a medical professional, is under siege in their hometown and mulling legal action against the state for arbitrary detention and unequal treatment. The allegations have damaged his medical reputation and put his entire career in jeopardy. Shafi’s wife Imara told Reuters that she had stopped working and that all three of their children had been pulled out of schools.

This is not the first time individuals have been raked over the coals and lives and reputations ruined by unethical reporting practices. The digital age has meant information sweeps across the country faster than ever, ruining reputation of persons and transmitting fake news at the blink of an eye.

According to Dr. Ranga Kalansooriya, former director of Government Information Department, the media must be held accountable for what has happened in the country after the Easter Sunday terrorist attacks. “Although the authorities accused social media of stoking fire of racism, if you study the content, it was the mainstream media that have been stoking the fire from the beginning,” he said.

Dr. Kalansooriya said that most electronic media as well as leading newspapers were catering to the gallery and to the Sinhala-nationalistic market. “There is no point of blaming only the journalists or editors for the irresponsible reporting. There aren’t enough laws and regulations for the media in the country,” the senior media professional told the Sunday Observer. “Laws are available only for the print media, and those are 40 years old. There is no way for readers and viewers in the country to get justice,” he said.

Press Complaints Commission President Sukumar Rockwood told the Sunday Observer that the Commission had written to the Sinhalese language newspaper that first published the “story” on Dr. Shafi on the same day the news appeared, pointing to a breach of the PCCSL and Editors’ Guild code of ethics for journalists. “All relevant clauses were highlighted in the letter. The details were communicated verbally too. They did not agree with us verbally, and they have not written back to us either,” Rockwood said.

The PCCSL functions as an independent self-regulatory authority for the print media, under the umbrella of the Sri Lanka Press Institute run by journalists. However, with no power to take action against any newspaper or publication, the PCCSL is limited in its scope to respond to misleading information published in the media.

For instance, Rockwood said that in the aftermath of the Dr. Shafi saga, the PCCSL received a complaint about the misleading news report from an Attorney-at-Law. “Unfortunately, the rules of the PCCSL do not permit us to accept letters from third parties. Therefore, we informed the complainant to ensure that there is a verbal or written consent from the victim of the news report attached to the complaint,” the PCCSL President said. Rockwood hoped that the complainant would re-lodge the complaint in accordance with the PCCSL rules.

Rockwood said the Editors’ Guild of Sri Lanka had a decent code of professional practice for journalists. “The trouble is that journalists are not following it properly,” he said.

The PCCSL President admitted that the Commission stopped short of penalising newspapers or editors for violating the code of conduct, because that is the premise on which the PCCSL was set up as a self-regulatory mechanism. But it is precisely this lack of teeth that is heightening calls for the re-enactment of criminal defamation laws to curb unethical reporting and publication of news items that have life-altering effects on individuals. Currently under discussion is a Media Regulatory Authority, which if enacted into law, will cover both print and electronic media, and have powers to impose fines and penalties on media organisations found to be violating professional standards.

In the wake of the Kurunegala doctor’s controversy, the Free Media Movement and Sri Lanka Working Journalists’ Association have requested in writing from the Editors’ Guild to conduct an impartial investigation into the allegation made by the newspaper.

Working Journalists’ Association President Duminda Sampath told the Sunday Observer that they had requested the Editor’s Guild to start the investigation and intervene in preventing possible negative impacts through such reporting.

“We stressed the fact that reporting such news without evidence to support its credibility can cause distress and harm to Obstetricians and Gynaecologists, especially those who belong to the Muslim community, while their patients may feel distressed and scared,” Sampath said.

Convener of the Free Media Movement Viranjana Herath said, “This news can be considered as a one that can lead to increase in social tension and drive wedges between communities in an already segregated society. Therefore, we suggested that the Editors’ Guild initiate an impartial investigation into this issue for the sake of a media tradition with social responsibility.”

It is important to consider the measures that have been taken to regulate unethical reporting in other countries. An Independent Regulatory Commission can play a huge role in creating a responsible, accountable media culture in a society.

However, in 2016, a bill was drafted by former Director of Government Information Department, Ranga Kalansooriya to set up an Independent Regulatory Commission. The draft bill was approved by the Cabinet and a cabinet subcommittee too was appointed. However, there was heavy resistance from radio and television broadcasters. “After my resignation, that process did not move forward,” Kalansooriya said.

Meanwhile, opposition lawmakers are to propose the setting up of an Independent Regulatory Body and supplementary laws to regulate media institutions in the country.

According to Janatha Vimukthi Peramuna (JVP) MP Bimal Ratnayake, media outlets have become modes to spread racism, and there is an urgent need to curb the trend. “Racism has been given wings by media outlets,” he said. “There is a need for an independent regulatory authority with power to take action against the media outlets that stoke the fire of racism,” he said.

According to Ratnayake, the JVP will present a comprehensive plan in the week ahead to prevent the spread of racism.